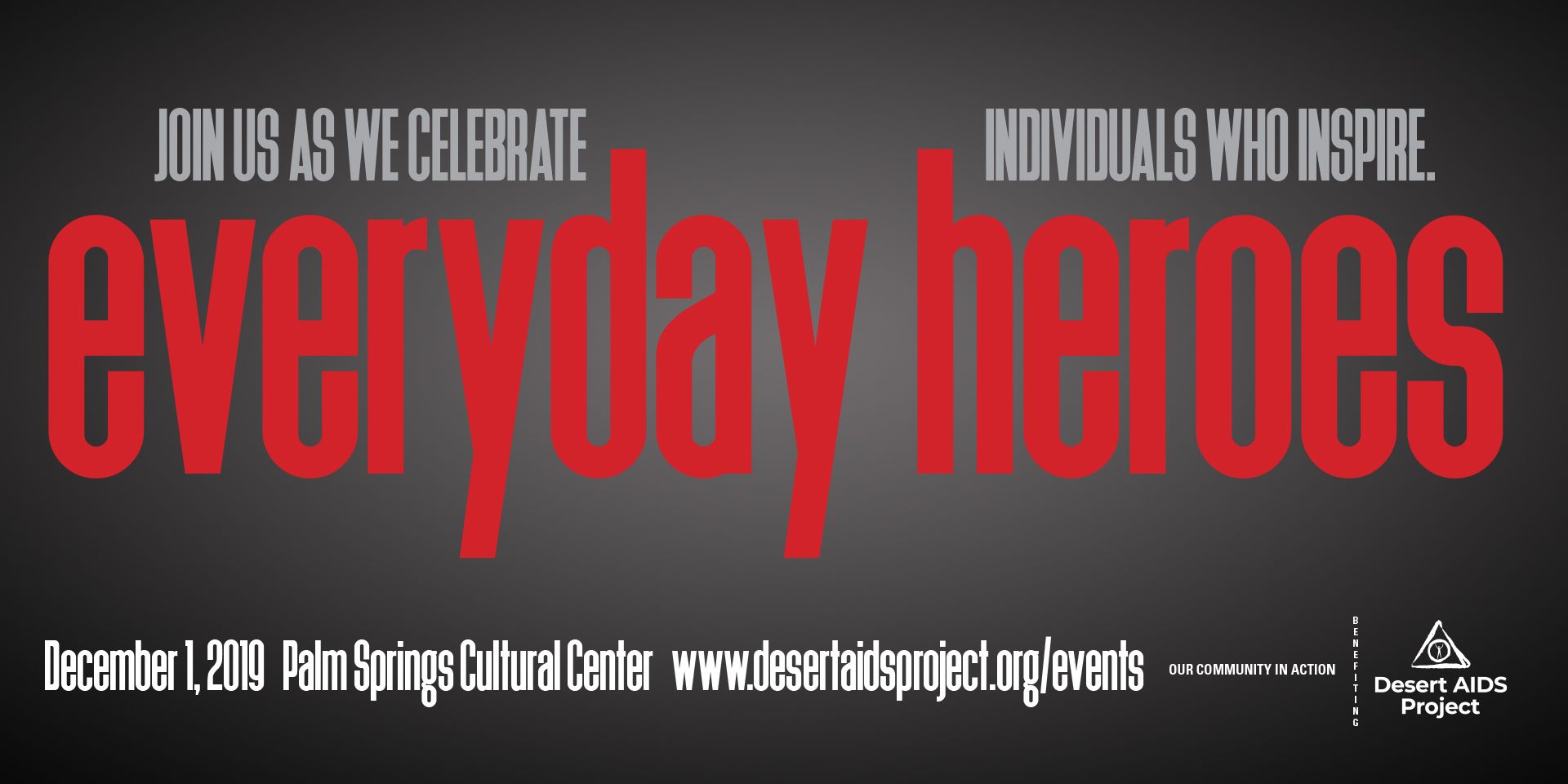 Everyday Heroes was born six years ago and, since then, the annual event has sought to share the inspirational stories of local volunteers and the countless different ways people make a difference in our community, in addition to or instead of writing a check as a show of support. The work of each year’s honorees is heroic and deserves the type of recognition traditionally reserved for major philanthropy in our valley.

Desert AIDS Project’s CEO, David Brinkman, believes “Everyday Heroes connects deeply to the humanitarian work of Desert AIDS Project because each of the honorees, in their own way, helps DAP do the work we do to remove roadblocks to human potential.”

This year’s event will honor the humanitarian legacy of Barbara Keller by introducing a Community Action Award bearing her name. The award this year will be presented to Bondhus and Stiles, and will honor a different individual’s legacy in the years that follow.

Co-chaired by Terri Ketover, Ann Sheffer, and Tom Truhe.  The event will be produced by Frank Goldstin of Momentous events and feature short films of the honorees created by Abiel Hernandez, and images of the honorees by famed photographer John Paschal.

Broadway star Davis Gaines will perform live during the show. Gaines performed the title role in Andrew Lloyd Webber’s The Phantom of the Opera over 2,000 times, during his run on Broadway, in Los Angeles, (where he remains LA’s longest-running Phantom), and in San Francisco, (where he received the Bay Area Critics’ Award for Best Actor). Subsequently, he was chosen by Hal Prince and Lloyd Webber to play the leading role in the World Premiere of Whistle Down the Wind. Gaines has sung for five U.S. Presidents and with every major symphony orchestra in North America, including the New York Pops at Carnegie Hall and the Hollywood Bowl Orchestra at the Hollywood Bowl. His voice can be heard over 30 cast recordings and compilation albums, as well as two solo CDs, Against the Tide and All My Tomorrows: Songs of Sammy Cahn.

Molly Bondhus and Wil Stiles recently celebrated their boutique’s 10th Anniversary by donating $500,000 worth of new fashion to Revivals Stores, to raise funds for Desert AIDS Project.  The couple has been active in volunteering and fundraising for LGBTQ and AIDS-related charities in both Minneapolis and Palm Springs for over 23 years. Past efforts included several years of coordinating fashion shows at major fundraising events for Design Industry Foundation Fighting AIDS (DIFFA) in Minneapolis. Since the WIL STILES Store opened ten years ago, all excess inventory has been donated to Revivals Stores in support of Desert AIDS Project, as well as cruiser bicycles and gift certificates to various Palm Springs charitable auctions. Bondhus previously served on the board of AIDS Assistance Program (AAP). The couple provides direct financial support to: Sanctuary Palm Springs and NCLR, Friends of the Palm Springs Animal Shelter, Planned Parenthood, Southern Poverty Law Center, RAICES and the Brooklyn Community Bail Fund.

Brett Klein is active in local LGBTQ, and HIV + Aging healthcare. Klein has served in many leadership and committee roles. He currently serves as President of the HIV+Aging Research Project – Palm Springs (HARP-PS), which is focused on HIV+Aging research studies to improve the lives of those living with and affected by the disease. Klein says, “I am motivated by the need to help educate the community regarding issues that are personal to me; cycling and pedestrian safety, HIV+Aging concerns, and helping nonprofits at the grassroots level.”  This year, Klein is honoring his 58th birthday by launching his AIDS/LifeCycle 2020 participation.

John Bingle Thompson is a volunteer at Revivals Palm Springs store where he has been lending his talent since 2015. He handles all of the new clothing merchandise and assists customers in styling when he’s present in the store. Thompson has been featured in magazines for his design work of his homes and consults on the layout of Revivals stores. Thompson also volunteers for Modernism Week, Palm Springs International Film Festival, American Documentary Film Festival and ShortFest.

Click Here to Reserve Your Tickets for Everyday Heroes