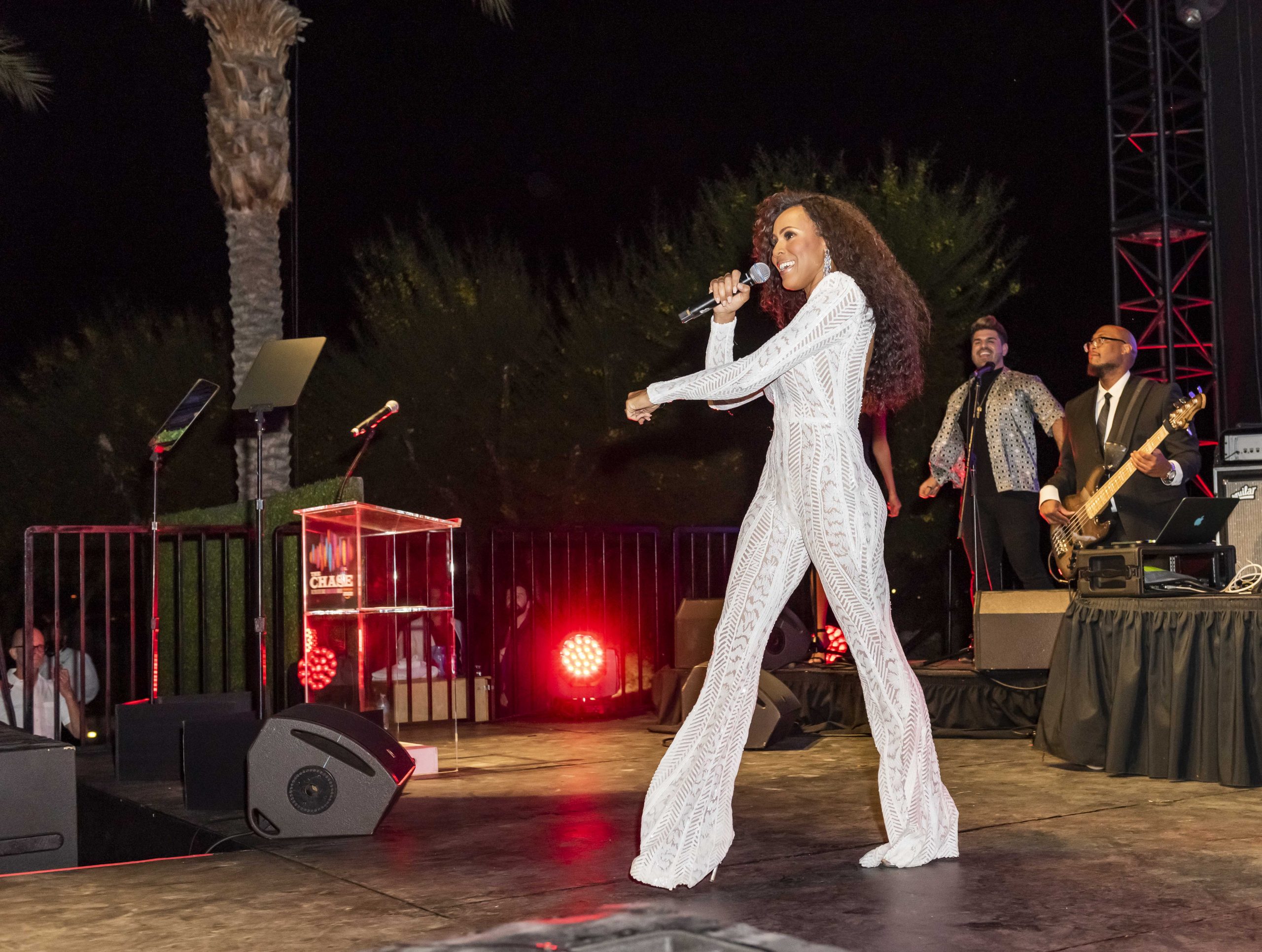 After an absence of more than 24 months, DAP Health presented its big annual benefit gala, The Steve Chase Humanitarian Awards — rebranded “The Chase” for 2022 — set against the dramatic backdrop of the San Jacinto Mountains outside the Palm Springs Convention Center on Saturday, April 9.

With a promise that attendees would “gala like never before,” the evening was indeed a departure from the usual such soirée held during the desert’s high season, starting with a cocktail reception featuring hot and cold hors-d’oeuvres provided by Lynn Toles’s Savoury’s Catering from 5:00 to 7:00 p.m., during which more than 1,000 guests mingled with one another — some catching up with friends and acquaintances they’d not seen since the social circuit was abruptly shut down due to COVID in early 2020. All the while, acclaimed trumpeter, songwriter, producer and musical director Spencer Ludwig (a Latin Grammy winner who has performed with Dua Lipa and Harry Styles, but to name two musical megastars) DJ’d on the sun-dappled stage.

Broadway in the Desert

The entirely al fresco affair kicked off in earnest with a short set of show tunes performed by Tony-nominated actor and singer Max von Essen, accompanied on piano by actor, writer, producer, and radio host Seth Rudetsky, affectionately known in theatre circles as the “Mayor of Broadway.”

That dynamic duo was followed by the trio of gala co-chairs, DAP Health board vice chair Lauri Kibby and fellow board members Kevin Bass and Scott Nevins. Before thanking presenting sponsor Amazon and producing sponsor Eisenhower Health, Bass expressed how overjoyed everyone seemed to be back together again, likening the community to “a tribe, a village.”

Host Michael Urie — the beloved, award-winning television and stage actor perhaps best known for co-starring in ABC’s “Ugly Betty” from 2006 to 2010 — then took helm of the evening, telling the jubilant crowd how happy he was to “celebrate the invaluable, vital services DAP offers” before revealing his fervent desire to soon serve as someone’s Palm Springs pool boy, a running joke he’d revisit, to hilarious effect, several times throughout the evening.

CEO David Brinkman appeared next, delivering an impassioned speech in support of the organization’s “Vision Forward: Building for a Healthier Tomorrow” campaign. “So here we are, two years into devastating loss and isolation,” said Brinkman. “It can be exhausting. But it can also remind us of what matters most. It can clarify our vision of how we want to spend our time and resources in the future. Loss can erode our foundation, leaving us teetering, or it can motivate us to build a better and stronger community. I can assure you it’s done the latter for DAP Health.”

Urging attendees to join the philanthropic effort, he likened DAP’s work to that of weaving a net that’s held up by all for the benefit of those less fortunate. “Getting the care you need and deserve can be out of reach on the best of days,” he continued. “Imagine the added challenges for someone experiencing homelessness, struggling with a mental health challenge, fighting an addiction, facing discrimination, or simply living with the daily stress of poverty. Most of the people we serve face two or more barriers to care at the same time.”

After underscoring that Vision Forward will enable DAP to go from caring for 10,000 to 25,000 people annually, regardless of HIV status or ability to pay, Brinkman introduced the first of a series of videos highlighting the contributions of the myriad individuals who sustain DAP: its donors, volunteers, and staff members.

Rudetsky then returned to the stage, this time accompanied by Eden Espinosa — the original understudy for Idina Menzel’s Elphaba in the Broadway production of “Wicked,” who went on to play the role not only on Broadway but in San Francisco and Los Angeles. They brought the house down with their interpretations of “Imagine” and “Defying Gravity.”

Following that powerful musical interlude, Urie — who pulled double duty by also serving as the offstage voice throughout the show — made a second appearance, bringing veteran auction host Dale Johannes onstage. Together they dispensed a trio of packages, including one that boasted a small fortune of diamonds courtesy of Raju and Jaishri Mehta’s El Paseo Jewelers, that raised a total of nearly $100,000 for DAP.

Before introducing an Amazon-produced clip showcasing one of the online retailer’s trans employees, Kibby spoke forcefully about how DAP’s focus has shifted in recent years in order to provide an ever-greater umbrella of programs and services. “In fact, one of the groups the non-profit is most determined to bring under its wing is women,” stressed Kibby, “including trans women.”

Arguably the most moving moment of the night occurred midway, when DAP’s Director of Behavioral Health Dr. Jill Gover introduced a stirring video focusing on David Jervis, a once-suicidal patient who found the will and strength to survive after coming under the care of DAP psychologist Dr. Ryan Halquist. The montage was followed by the surprise appearance of Halquist and Jervis, the latter of whom — through copious heartfelt tears — said, “I am proof positive that DAP doesn’t just change lives. It saves lives. The size of your gift tonight doesn’t matter. All that matters is that you make it — that you do give — because when you do, you help DAP and professionals like Ryan pull people on the brink of the abyss back into the real world, where all of us belong. And for that, we the clients of DAP could not be more eternally grateful.”

When the “Fund the Need” portion of the evening arrived, Urie and Johannes — thanks to a matching gift of $250,000 from longtime desert philanthropist Mark Adams — raised more than $600,000. On. The. Spot.

Next, presenting DAP’s inaugural Health Equity Award to Congressman Dr. Raul Ruiz, Mayor of Palm Springs Lisa Middleton commented that the honoree made great strides in Washington not only to call out inequality in health care, but to rectify those injustices. “When COVID struck the Coachella Valley head-on more than two years ago, it was Dr. Ruiz who obtained much-needed monies for all local health centers,” continued Middleton. “DAP Health received more than $3 million in federal COVID grants thanks to his efforts. And our community benefited, with DAP caring for, testing, and vaccinating 8,000 of us free of charge.”

In his acceptance speech, Ruiz acknowledged all the friends and familiar faces he has been honored to serve for the last decade in Congress. “In your eyes, I see the struggle for equality and an unparalleled dignity derived from hope,” he said. “In your smiles, I see the sea of change that we have achieved together. And in your stories, I see my story and our common path towards a brighter, healthier future for all.”

The second and final award of the evening was bestowed upon every member of DAP’s army of nearly 400 valiant volunteers. In accepting on their behalf, Revivals Stores volunteer Barb Fairbairn — who retired a few years ago after a rewarding career in nursing at San Francisco General Hospital, where she worked during the height of the AIDS epidemic — said, “I think I can speak for all of us when I say that when we were told the organization’s volunteers would be honored at this year’s The Chase, our first thought was ‘Why us?’ We don’t do what we do because we want recognition … We do the work of volunteering because we feel we’ve been very fortunate in our own lives and we want to pay that forward. We do the work because it’s the right thing to do as human beings living in this world in these crazy times.”

Urie and Nevins closed out the evening by announcing that more than one million dollars had been raised for DAP over the last few hours. They then yielded the spotlight to Deborah Cox, a Grammy-nominated singer and actress best known not only for her Broadway turns in musicals such as “Aida,” “Jekyll & Hyde,” and “The Bodyguard” but for her chart-topping pop, dance, and R&B hits. The star capped her 30-minute set with a rousing rendering of her best-known smash, “Nobody’s Supposed to Be Here,” which got virtually every member of the audience on their feet to dance the night away. As irresistible as its beat is, the song’s statement was somewhat misleading. In fact, everyone was absolutely supposed to be there, because DAP’s reimagining of “The Chase” for 2022 was — in a word, and in every possible way — triumphant.

Full disclosure: Daniel Vaillancourt is the longtime scriptwriter of The Chase, having written the show since 2011.