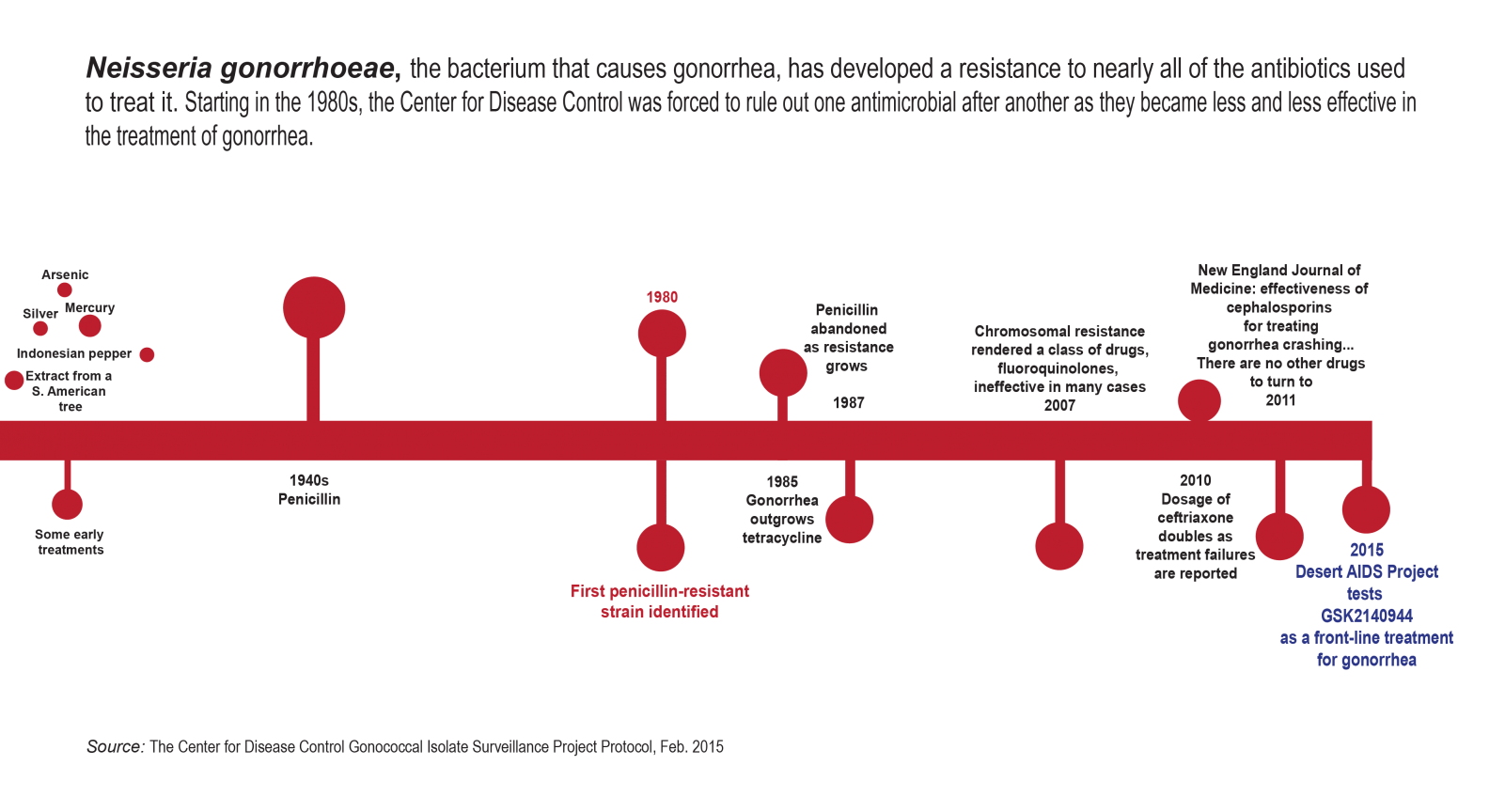 Click here to view a larger version of the above timeline

Under the direction of Dr. Steven Scheibel, D.A.P. is studying the efficacy, safety, and side effects of a drug that combats Nesseria gonorrhoeae, the bacteria that causes gonorrhea.

Gonorrhea is the second most common STI and a major source of morbidity worldwide. Without treatment, it can cause infertility, cervicitis, proctitis, urethritis, pelvic inflammatory disease, and pharyngitis. Babies grow outside the womb in some women and the infection makes both genders more susceptible to HIV, according to GlaxoSmithKline, sponsor of the study. They go on to say:

“The ability of Neisseria gonorrhoeae to develop resistance to antimicrobials has complicated the management of the disease, leading to an urgent need for new treatment options.”

D.A.P. is one of eight medical centers testing the new drug, called GSK2140944. The study invites 60 adults with gonorrhea infection to take a single dose of either 1,500-mg or 3,000-mg of GSK2140944. The study wants to know if the smaller or the larger dose works best. The study last about a week with two scheduled visits. On the first visit, doctors will dispense the drug and gather baseline information from the study subject. A follow-up visit, called the Test-of-Cure visit, occurs between day 4 and 8 and determines the subject’s response to the drug. That includes success, failure, and adverse effects. Although there are two scheduled visits, bad reactions to the new drug will be monitored until they are resolved.

So far, D.A.P. has enrolled three subjects in the study, to meet the six-subject goal for each site. Our clinical administrators are working on identifying additional subjects. “Right now, though, we have more subjects than any other site and we’ve enrolled them quickly,” says Rod Hagan, D.A.P.’s Clinical Research Coordinator. D.A.P. began accepting subjects about six weeks ago, while other sites have been at it since January. “We have a concentration of people in the Coachella Valley, who need support in fighting gonorrhea infection, so our services have to be cutting edge and we must be fast out of the blocks,” Dr. Scheibel states.

Although the name of the drug sounds like a chemical weapon from an action hero comic strip, the problem and the need for an immediate answer is very real.

According to the study protocol, a variety of antimicrobial agents have been used over the years for the treatment of gonorrhea. Effective treatment options for gonorrhea have diminished rapidly because of the emergence and worldwide spread of antimicrobial resistance to many drugs previously used or considered the first line. The study goes on to list six drugs that patients are taking to almost no effect.

“Azithromycin was the big tah-dah,” Rod says. “But N. gonorrhoeae has become resistant to it and there’s nothing else in the pipeline. Without a new treatment, it could be like it was at the turn of the century again and it could be fatal.”

D.A.P. is trying to keep that from happening. We’re participating in this study and several other clinical trials that aim to improve the lives of patients and clients living with HIV. The search for a new antimicrobial is one of five that D.A.P. has conducted in the past 12 months. Those studies include Medication Therapy Management, a study on HIV, aging, and the brain, a study that searches for a milder antiretroviral that we’ve called Switch, and a new treatment for anal dysplasia. These studies represent a new function we’ll perform for the HIV community here and abroad. Beyond those in disadvantaged communities in the Coachella Valley, many others — nationally and globally — will benefit from our findings.

“Our search for a new treatment for this drug-resistant strain of gonorrhea is one of the most important things we can do,” Dr. Scheibel says. “We have to get out in front of this challenge because it threatens us locally and globally.”